A few years back I wrote a very long and heavily researched paper about the implications of streaming services on the music industry and the economy of that industry. It was stressful and took about 6 months to write and I’d essentially blacked it out of my memory until about 2 weeks ago. Roark retweeted an article from pitchfork last week that got me thinking about the legal implications of streaming and how artists are getting gypped out of money because of fancy algorithms and the changing music landscape. The Economist also wrote an article about how Spotify specifically is disrupting the music industry, not only in sales of music but also in the way that major labels operate. So that got me thinking…how is this currently disrupting the market? What have I missed in the 3 years since I wrote this paper? Lets start with a few basics on streaming. 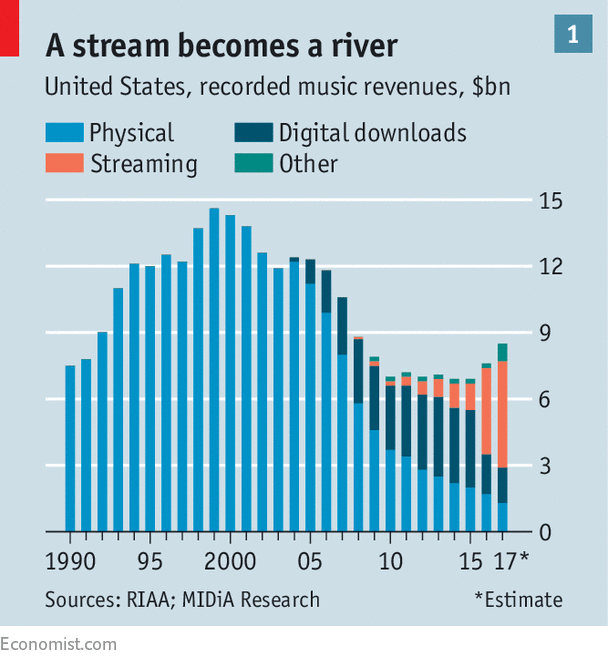 Streaming got started in the mid-late 2000s (I remember it most with Pandora around 2007) and along with digital downloads starting hacking away at physical album sales. CD sales were plumeting and everyone was downloading songs from iTunes (if you were a bit bolder and more tech savvy you were probably using LimeWire to illegally download your music. maybe. Didn’t hear that from me). Within the past 4-5 years or so streaming has started to take over both physical AND digital downloads (hello Spotify and Apple Music, Tidal kind of ?), but has also contributed to the growth and revival of music, and is increasing revenues for the industry as a whole. The graph above shows the trends and if you want to learn more about how labels are capitalizing and adapting to streaming Warner Music Group is a great example.

The question then becomes, how much do these guys get paid? Artists, writers, composers, producers, how do they get MONEY? Well, Its not as cut and dry as it used to be. 10 years ago 1 album or single purchased at the record store or on iTunes could easily be translated into 1 sale. So if 100 albums where sold you knew how much you were getting depending on your royalty rate. Example: your royalty rate is 50% (lol, fat chance). You sell 100 albums for 10 bucks each. You make $500. Math is cool.

Now with streaming services serving as the primary way to consume music and songs having hundreds of thousands of streams, how do those streams equate into actual sales? This is the question that labels, artists, and streaming services alike have fought (and gone to court) over since streaming began. How many listens equals one sale? And how much is one sale worth?

Well, this is insanely complicated. and quiet frankly, its complicated on purpose.

There are different kinds of licensing fees, different copyrights, different kinds of streaming services, and different requirements from each label. If you want to learn more about the deeper intricacies and the history of this landscape, I recommend reading a very cool faculty paper from our very own BC Law School which is available online and features Aloe Blacc as a writer (who co-wrote Wake Me Up! By Avicii). To give a very general understanding, there are 2 different copyrights on a song, the composition (the actual music and lyrics) and the sound recording (what you hear on the radio/computer/etc). Each of these get different royalty rates. There are also 2 different kinds of licensing deals to pay for streaming songs. A blanket fee, which is a set fee paid by a streaming service or company to use ALL of a labels repertoire of music. Or a statutory license, which pays artists at a certain rate per stream.

Depending on who you are in the pipeline of music, you probably aren’t making that much on streaming services. This slidedeck is a pretty good start to understanding how the money is distributed. If you want to break it down, an indie artist on Spotify had about 4.3 million streams on their music and made just over $5 grand in royalties this year. Uh, what? And this guy didn’t have to share his royalties with ANYONE. He didn’t split it between the label, publishers, and songwriters. That was the total royalty payment for a song that got played over 4 MILLION TIMES. In conjunction with that, Spotify is paying about 75% of their revenue on royalty rates and has never had a profitable quarter, yet the amount that artists are getting paid is STILL going down. So what gives?

Well there are a multitude of factors. To start, no one can actually decide on what 1 stream is worth, dollar wise. And major labels have gone to court a LOT to figure that out. Its an arbitrary number and the battle is decided by the Copyright Royalty Board (a government agency). Network affects also play a role. 1 million streams is worth more when there are only 2 million users vs. when there are 70 million of them. The changing publishing landscape to digital also affects how much artists are paid. Artists used to need a label to distribute their music. Like actually could not get it out into the world without one.  Now artists can use their bedrooms to record music and use online labels and distributors to get their music out there. To focus on Spotfiy again, they have 30 million + songs in their catalog and add about 20,000 new songs EVERY DAY. Thats a lot of people to pay.

So, what does that actually mean?

Bottom line, this is uncharted territory. All of these questions are arising and they are questions and problems that artists, labels, music producers, distributers, and even consumers have never seen before. As this digital landscape evolves, how people listen to music and how they expect to pay for it will change. Along with those market trends, streaming services AND labels will have to adapt to this digital landscape. The Copyright Royalty Board just recent approved a new increase on rates (the largest they have ever done) and the Economist article linked above discusses the potential for Spotify to sign artists on their own, as a label would do. Like Blockbuster, physical copies of entertainment are dead. Streaming is the new king of the entertainment world and everyone’s got to get with the program. We’ve also got to figure out what that program actually is.

← Ripple Recap: Ripple vs. Other Cryptos and Its Financial Outlook
Trust in the Digital Era →