How to Find the Best Seat in the House

One of my favorite things to monitor is the price of tickets for sporting events on the secondary market. If that sounds crazy, it is. It doesn’t matter if I have any intentions of going to the game I am monitoring or not, I just like watching the price fluctuate days leading up to the game. For some reason, I get a sick thrill out of watching a game with my friends and being able to say, “Tickets for this game went up by 60% in the last week!” No one usually cares, but I still find it interesting.

The secondary market for Super Bowl tickets every year is always the most highly anticipated price movement within this industry, as the two teams who are playing in the game aren’t decided until two week before the big game. This was ever so true this past month, as tickets for Super Bowl LI on the secondary market dropped over 25% in the 72 hours after the Minnesota Vikings were eliminated.  Still, as game day approached, the prices began to climb back up, making this the most expensive average Super Bowl ticket price on record. 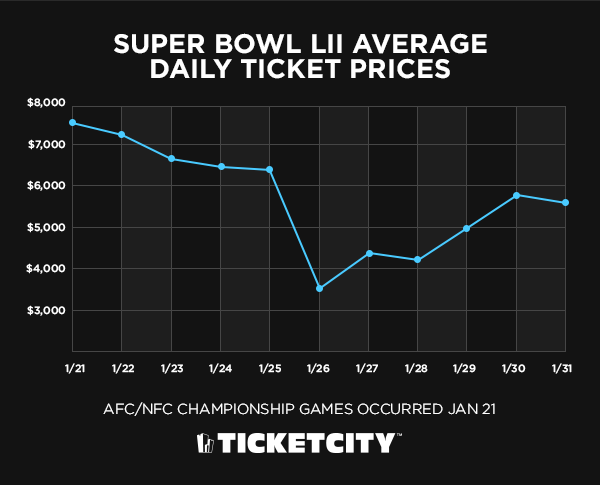 One of the things that I have noticed during all of my secondary ticket market research over the years is that while there are a lot of different websites to purchase tickets from, the only true differentiation between them is the price I’m going to end up paying for the ticket. Is there something I have been missing, or is this industry simply a fight amongst sites to get re-sellers to sell their tickets on their platform?

In order to put this to the test, I decided to research ticket prices for the same game on the three of the most widely used online tickets sites: Vivid Seats, StubHub, and SeatGeek. The game that I decided to research was the April 10th matchup between the New York Yankees and Boston Red Sox at Fenway Park. I’m planning on going to the game anyway, so I thought looking in to this game would kill two birds in one stone. When I buy tickets, I usually stick to StubHub and SeatGeek, so I thought that I would first look into Vivid Seats.

The first thing that I noticed about Vivid Seats was that its user interface was archaic. The interactive seating chart on the right side of the screen looked like it hadn’t been updated since the early 2000’s when the site was launched. Aside from the aesthetics of the site, Vivid Seats had everything that I was looking for. It allowed me to sort the tickets by price, its own “Value Score”, and the overall best seats by location. The one thing that Vivid Seats lacked for me was the option to show the price of the ticket with fees. Charging an additional fee on top of the price that the seller is looking to get for the ticket is how these sites truly make their money. Vivid Seats service fee is typically 20-40% of the ticket price. Hiding this fee until it is time to checkout seems to be sneaky, as it does not give the consumer all of the information about the purchase upfront. It was not until the checkout screen that I learned that an $81 ticket in Grandstand 25 would have a $20.25 service fee attached to it, making the real price of the ticket $101.25. That’s kind of a big difference.

The next site that I checked out was StubHub, a place that I choose to buy tickets on often. While StubHub’s seating chart is not leap and bounds above Vivid Seats in my opinion, it is much more interactive, as I can learn about the price and quantity of tickets available in each section by simply hovering my mouse over a given spot in the ballpark.

Like Vivid Seats, StubHub has the ability to filter the tickets by price, value, and location. However, its “Filter” button allows you to show the price of the ticket including the service fee, which is what is shown in the screenshot above. While the cheapest ticket in the same section as on Vivid Seats is about $10 higher, I personally find value in the ability to see the final price of the ticket in the search process, as it cuts down on time trying to figure out how much the fees will be. A few years ago, StubHub experimented with “All In Pricing”, in which the only price it showed you was the total price of the ticket including fees. It turns out that the higher initial price turned people away and led to declining sales for StubHub. In this newer model, StubHub appears to have found an even ground by giving the buyer an option as to what part of the buying process the service fee is tacked onto the ticket.

The third and final site that I took a look at was SeatGeek, which is one of the newer players in the industry. Founded in 2009, SeatGeek’s competitive advantage is in its DealScore algorithm, which serves to find the combination of best available price and seat location for a particular event. This score is based on a 1-10 scale and is designed to help the buyer understand what seat will give him or her the most bang for their buck.

The first thing that jumped out at me about SeatGeek was how much more modern its user interface looked than StubHub and Vivid Seats, whether it is the DealScore key in the top right, the DealScores on the left hand side, or the color coded chart on the ballpark to show the buyer where the best seats are. Like StubHub, hovering the cursor over certain sections of the ballpark gives the buyer valuable information about the price and quantity of tickets available. It also allows the user to filter between price, quantity, and the option to show the price with the service fee. SeatGeek’s ticket price for Grandstand 25 is practically identical to StubHub, which makes Vivid Seats the cheapest website for this particular game by about $10.

While price is likely to be the biggest factor for most buyers of secondary market sports tickets, there are some other smaller factors that could be considered as well. Though most tickets are now electronically delivered to your email address associated with your account a given site, there are a small percentage of tickets that sellers are only willing to ship via FedEx or UPS. These tickets are much less desirable and can really only be purchased weeks in advance to ensure that the tickets arrive before the day of the game. The possibility of fraudulent tickets is still something that leaves consumers weary of purchasing tickets online through third parties. Vivid Seats used to be one of the only third party platforms that offered a 100% money back guarantee on fraudulent tickets, but it has since become an industry norm and is offered by all sites.

When I started doing this research, I didn’t expect Vivid Seats to have the lowest price. I usually stick to StubHub and SeatGeek because their platforms are more user friendly and easy to navigate, as they provide me with more information up front in the process. As April 10th approaches, I think I will have to monitor the prices on three sites instead of just my original two. That way, when I am sitting at Fenway Park in April, I can tell my friends how good of deal our seats were, and they probably still won’t find it as interesting as I do.