Social Media: Why Engagement is Key.

This past weekend MIT held the Sloan Sports Analytics Conference and a topic I noticed from some of the twitter posts was the emphasis on engagement over followers and assumed popularity.

“People spend a ton of times looking at the wrong things. It is a legacy of an impression-driven market. People are obsessed with the number of followers someone has when really engagement is the key.” – @eblindsey #LogoAnalytics #TalkDataToMe #SSAC18

We have talked about the issues with certain pages that have tens of millions of followers, but lots of those followers are fake or bots, and their engagement with those followers is very low.  So why are followers deemed so important and why is engagement less so? Is there a mix that needs to be present for both follower count and engagement numbers?

Businessinsider wrote an article on this a while ago in regards to social media and sports media companies. The article focuses on SportsCenter and how it is lagging behind heavily in social media engagement, and thus losing precious market share which it once controlled. In generally, a large portion of the population is now looking to social media for its news and updates, and not waiting to find out about it on TV. This creates an importance for social media engagement to reach a large sector of followers and audience. This graph shows the difference between the social engagements of 3 major sports media companies. 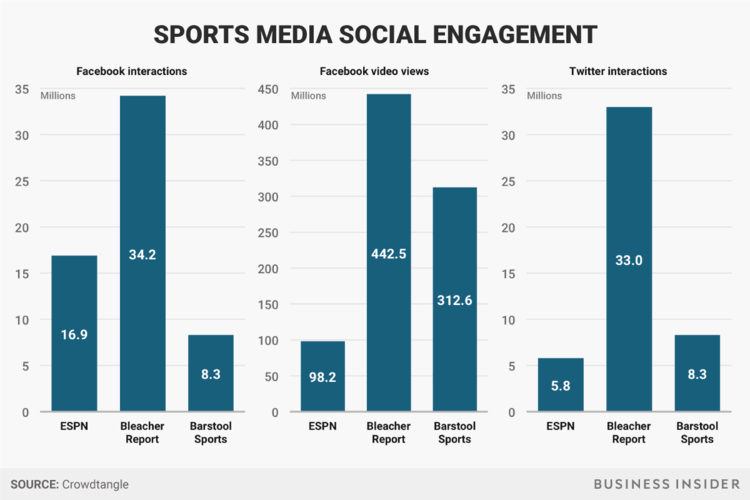 As the graph shows, ESPN is lagging HEAVILY behind Bleacher Report and Barstool in views and fan interaction across major social media platforms. So if ESPN, while having huge deals with all of the major sports leagues and having a huge platform with almost half a billion visits to its site every month, but viewers look at only a few pages per visit, compared to some other sites that have a dozen, and they don’t drive a lot of traffic from their social media platforms.

ESPN is a great example to use because regardless of their social media engagement and follower engagement in general, they are still a very large company.  What will be interesting to look at is how this will effect their volume of younger fans. Across all media, not just sports, people have turned to social for most of their content and news and while they are successful now, is ESPN missing out on a large opportunity and losing marketshare by not engaging enough?

Another thing that needs to be addressed is the idea of fake followers. The NYT wrote a detailed article about a month ago detailing the “black market” for social media followers. While some individuals boast to having hundreds of thousands or millions of followers, quiet a few have purchased “followers,” which are really bots that artificial boost up numbers and engagement for people’s accounts. So lets say a company has 10 million followers, but only 1 million of them are actually engaging with the company regularly and genuinely, then does it really matter what their follower count is? The actually profit that could be earned and exposure gained through this account is no longer accurately depicted through simply the follower account. This is a big problem specifically with models and influencers on social media platforms. As an admittedly not amazing example, Kim Kardashian West has about as many fake followers as she does real followers on twitter. While Kim still has a huge influence on her market, other smaller influencers that are still building up their brands could be less influential if their deemed influence isn’t accurate. It’s also not even simply about fake followers but also unengaged followers in general. While the followers may not be fake per say, if they don’t regularly use social media or care about the content that an account produces, then they aren’t actively engaging in the content, and thus not as important as a simple number.

This information is particularly important for advertisers and sponsors. While follower count is a necessary indicator of relevance and can give a general idea of how many people know/care about a company, if the majority of the followers are fake, or they aren’t truly engaged in the content/media that a company is producing, then the relationship between media company and advertiser isn’t going to be as profitable as it could be. Companies that have less followers but much higher fan engagement levels based on impressions, bounce back, and duration on the site, can create a more desirable relationship than those with a lot of followers but very little follower engagement.

Follower and fan engagement has become a huge focus for media companies and I’ll be exploring this idea further in another blog post focused on Barstool Sports, its integrated content, and its rise as a media company. They are a company that has excelled with monetizing on fan engagement and commitment, and while controversial, show the benefits of having a dedicated fan base online.